Mike Mulligan and His Steam Shovel (by Virgina Lee Burton) is one of my treasured childhood books.  It tells the story of Mary Ann (the steam shovel) who is eventually outrun by industrialization -- the electric variety.  But, the best part of the story is how a little boy comes to watch, then a school, then the mayor, the firemen, the garden club, etc., until finally the whole town is standing around and watching Mary Ann "dig more in one day than a hundred men could dig in a week."

Just this morning, my kids ditched their schoolwork at the first sound of a new machine outside.  Some kind of conveyor belt is moving tiles and workers up to the roof next door.  In the past, they've run to watch the garbage truck, the recycling truck, moving vans, motorcycles, mulchers, and street cleaners!  Of course, ditching schoolwork is always easy to do, but there is more to it than that.  Watching work can be a learning experience.  They may see efficiency at work, or they may find ways to improve things.  Perhaps they will invent something new by learning how things are done now.

It is easy to see that there is a true fascination that we have with watching work -- especially when machines are involved.  And we'd all rather watch work than do work!  I am avoiding some work right now, just by blogging.  I'd better get back to it and see if I can drag my students along with me!
Posted by FLBerrys at 8:09 AM 1 comment:

Email ThisBlogThis!Share to TwitterShare to FacebookShare to Pinterest
Labels: education

When my children were very little, my husband and I brainstormed, "How can we make God/Jesus real in our home?"  How does a toddler come to know that God and Jesus are real -- when they can't be seen?

We first decided to let them be seen.  We read Bible stories (The Beginner's Bible) with colorful pictures.  Then, I found a greeting card that had a picture of Jesus and a little lamb.  I cut it out.  Every night before bed, as we said our goodnights, we hugged and kissed the kids and then we all told Jesus "Goodnight."  Holly would kiss His picture and say, "Night, night Jesus!  I love you!"  She knew about Jesus from the Bible stories that we read, but the picture solidified things.  As she got older, and she could understand the abstract concept of God being a spirit (as much as we humans can understand the concept), the picture was put away.

When both our kids were a little older, but still preschoolers, we read about the last trumpet sounding and Jesus' return.  We wanted to make that memorable and real as well.  We pulled out the mattress from the sleeper sofa and laid it on the floor in the family room.  We handed out noise-makers (party horns).  As Daddy read the story and reached the part about the trumpet, we all blew our horns!  Then, as we heard that Jesus was in the air and we were going to rise up to meet Him, we all jumped up and down on the mattress, trying to jump as high as we could to meet Him.  We did this several times over a few years and my kids still remember it -- almost 10 years later!

I had a friend long ago, who was very interested in making Santa real for her kids.  When her son reached the age of 12 and began to question that fact, she and her husband worked extra hard to keep him believing the fantasy.  They created a video of Santa coming on Christmas eve that probably bought them another 2 years of belief.  I thought she was going a long way to lie to her kids.  I would much rather go the extra mile to teach them the truth and have them believe that.  If you've done something special to "make it real" for your kids, please post a comment. THANKS!
Posted by FLBerrys at 7:12 PM 5 comments:

Many days, it is a toss up at our house.  What will get done -- our school work or the housework?  Usually schooling wins.  If I get too caught up in cleaning, I lose my pleasant attitude for kid interruptions.  Since I don't want to be Simon Legree (the mean slave driver from Uncle Tom's Cabin), I have lowered my cleaning standards a lot!

Homeschooling definitely adds extra challenges to housework, basically, because we are home a lot!  We use all the rooms of the house, all day long it seems.  And then there are projects over there and books everywhere.

Now that the kids are older, their daily chore list really helps to take care of some of the most important bits of housework.  The toilets get cleaned every week because Holly, 14, takes one, Elijah, 12, takes one, and I, age unspecified thank you, take one.   Each kid is assigned a tub and counter space as well for scrubbing.  They have each become experts keeping their rooms tidy (although they could dust more).  Elijah has really "shaped up" this year as he gave himself the incentive of listening to his favorite story audios while he cleans.  He looks for excuses to go in and straighten and organize so that he can avoid schoolwork and listen to his CDs.

Unfortunately, I'm noticing that we've let some dusting slide lately.  Things that go unnoticed (like baseboards) are becoming noticeable due to all those dust bunnies perched on top.  I am itching for a spring clean.  But, my school plans are already laid for a busy (and messy) January!  So, I've penned in my February schedule:  spring clean one room each day.  As a kid, I never dreamed I would look forward to spring cleaning.  My mother would be so shocked - let's don't tell her!
Posted by FLBerrys at 7:26 PM 4 comments:

My Favorite Psalm - Chew on This Today

1Except the LORD build the house, they labour in vain that build it: except the LORD keep the city, the watchman waketh but in vain.
2It is vain for you to rise up early, to sit up late, to eat the bread of sorrows: for so he giveth his beloved sleep.
3Lo, children are an heritage of the LORD: and the fruit of the womb is his reward.
4As arrows are in the hand of a mighty man; so are children of the youth.
5Happy is the man that hath his quiver full of them: they shall not be ashamed, but they shall speak with the enemies in the gate.

Posted by FLBerrys at 7:15 AM No comments:

Science and the Bible.  Friends or foes?  I believe they are best friends, even when neither scientific nor religious worlds acknowledge that fact.  Science sprang from creation -- the ordered universe created by the God of Abraham, Isaac and Jacob.  Only because there is creative order, can it be studied and learned.

Sadly, I've heard otherwise devout Christians question the Bible where it states, in Genesis 1:3, "God said, 'Let there be light...'" just because thirteen verses and three days later, He created the sun, moon and stars.

Yet, even self-professed evolutionist and secular humanist Isaac Asimov, a prolific writer of both science texts and science fiction, wrote "there is no puzzle in the fact that God created light on the first day and the Sun, Moon and stars on the fourth.  Light is the thing itself, the heavenly bodies merely the containers."

Asimov goes on in that same essay (The Bridge of the Gods, 1975) to describe the studies that have been performed to uncover the mysteries of the rainbow.  He gave me an a-ha moment that I never learned in Sunday school, sad to say:

"His [Isaac Newton's] final conclusion, then, was that sunlight (and white light generally) is not pure but is a mixture of colors, each of which is much more nearly pure than white light is.  No one color by itself can appear white, but all of them together, properly mixed, will do so." 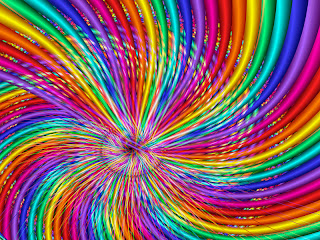 Suddenly, it occurred to me, when God said, "Let there be light" He not only turned on the light, but He also created all color!  After darkness, suddenly red, orange, yellow, blue, green, indigo and violet!  And that is just the visible spectrum!  And when Noah's flood ended, He wrapped all those colors in a bow and set them in a cloud as a reminder of His promise.  And when we see Him at the Judgement seat, a rainbow of colors covers Him.
Posted by FLBerrys at 7:27 PM No comments: